(This is a copy of the readme file from the repository.)

The best way to use Bogus is to setup it locally in your profiles.clj file:

Once you have the dependency added and the bogus.core namespace imported, place one of these two forms into your code:

Now run the function, and you’ll see the UI: 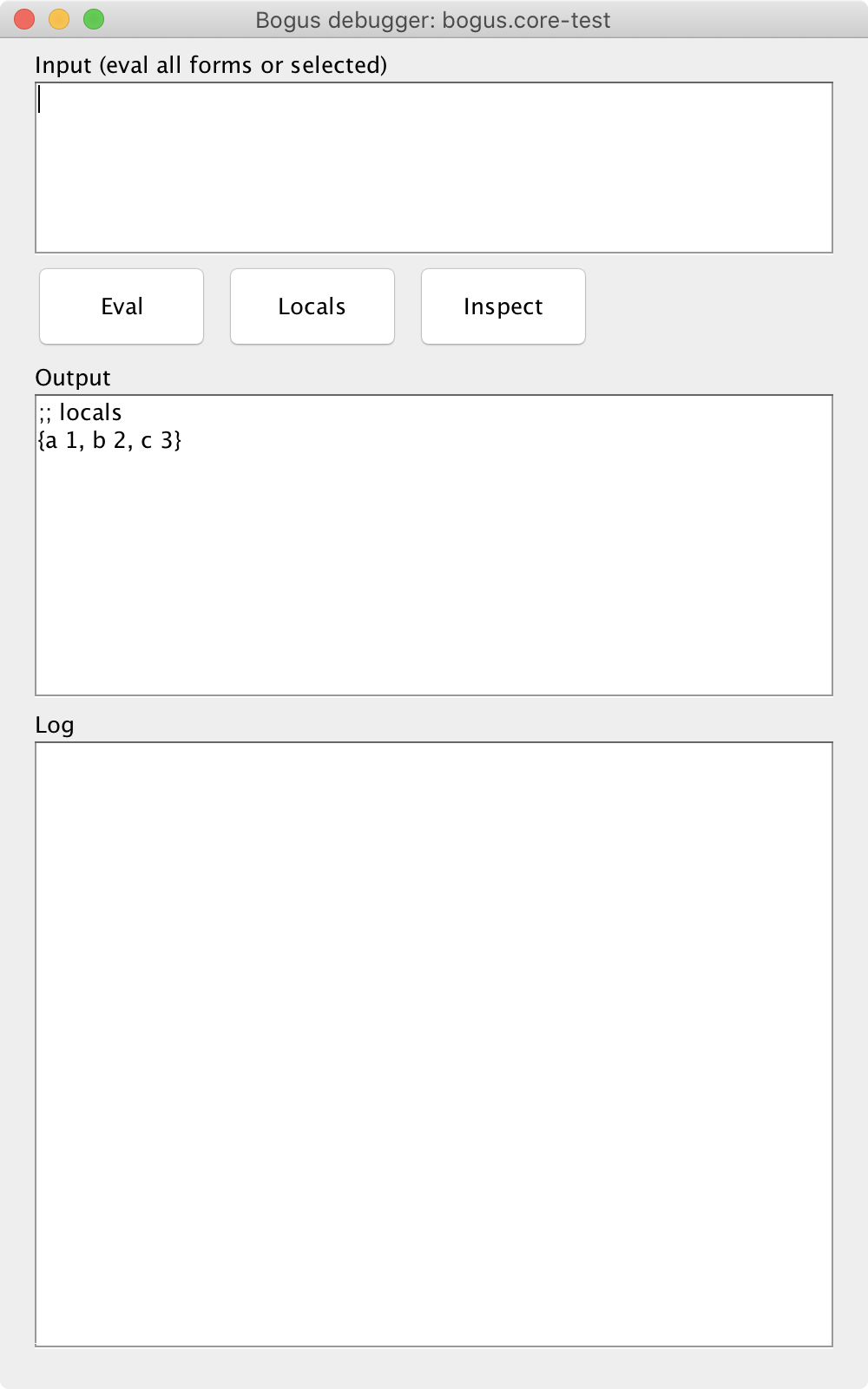 The UI consists from three parts: the input area, the output, and the log. Type any Clojure-friendly form in the input textarea and press “Eval”. The result will take place in the output textarea. You can copy it from there to your editor.

The input can take many Clojure forms at once. They are executed as follows:

so you’ll get the result of the last one.

If you mark some text in the input with selection, only this fragment of code will be executed. 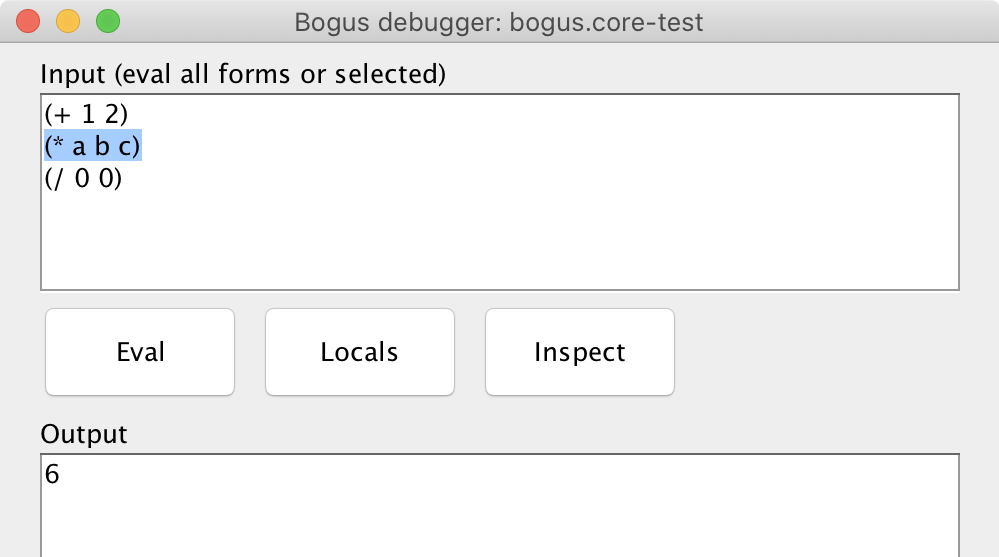 In the input code, you can use any local variables as they’re global ones. In the example above we’ve executed the (+ a b c) form referencing local a, b, and c from the let clause.

The “Locals” button pretty-prints the local variables. Bogus does it in advance when the window opens the first time. The “Inspect” button opens the standard clojure.inspector/inspect-tree widget rendering the locals. This is quite useful when examining massive chunks of data. 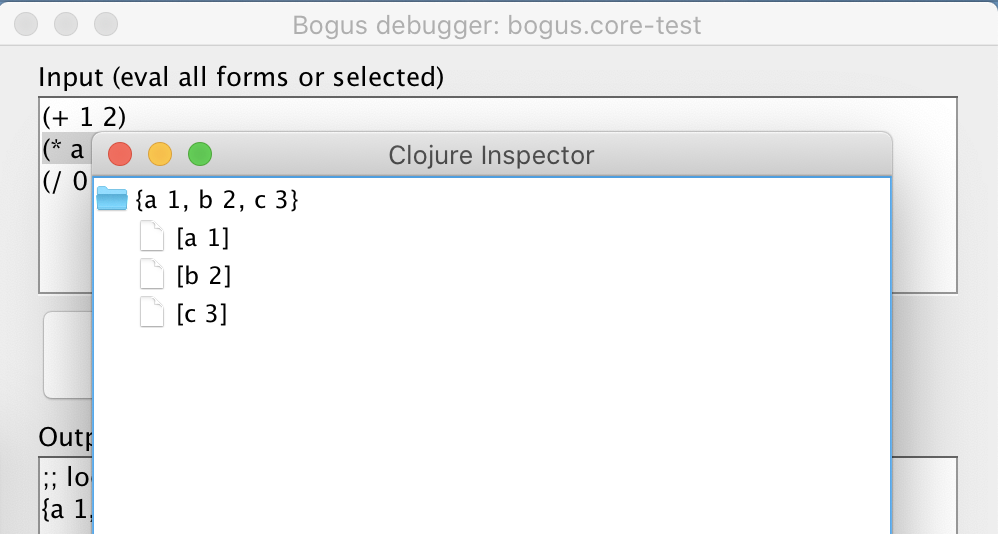 The Log area tracks the history of the expressions you executed and their results. That’s useful sometimes to copy-paste it somewhere. Should you get an exception, it gets rendered with the clojure.stacktrace/print-stack-trace function (which probably needs some improvements). 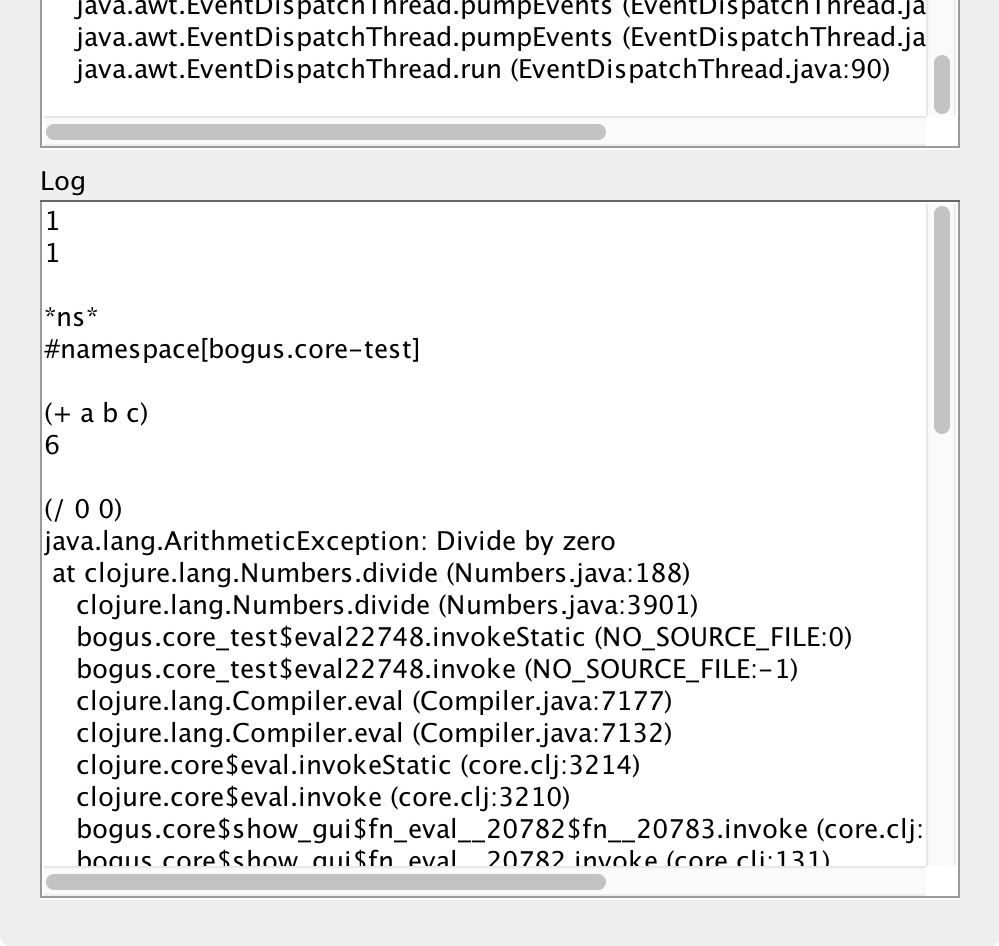 You can have several debug breakpoints, for example:

The first debug session will take the a, b, and c locals, whereas the second one will have a, b, c, and d. You won’t proceed to the second session until you close the first window.

Bogus debugger works in tests, in nREPL, in ordinary REPL, in Manifold, in the futures as well. Here is a small demo of having two debug sessions in parallel threads:

If you run this code, you’ll get the two windows each having their own locals: 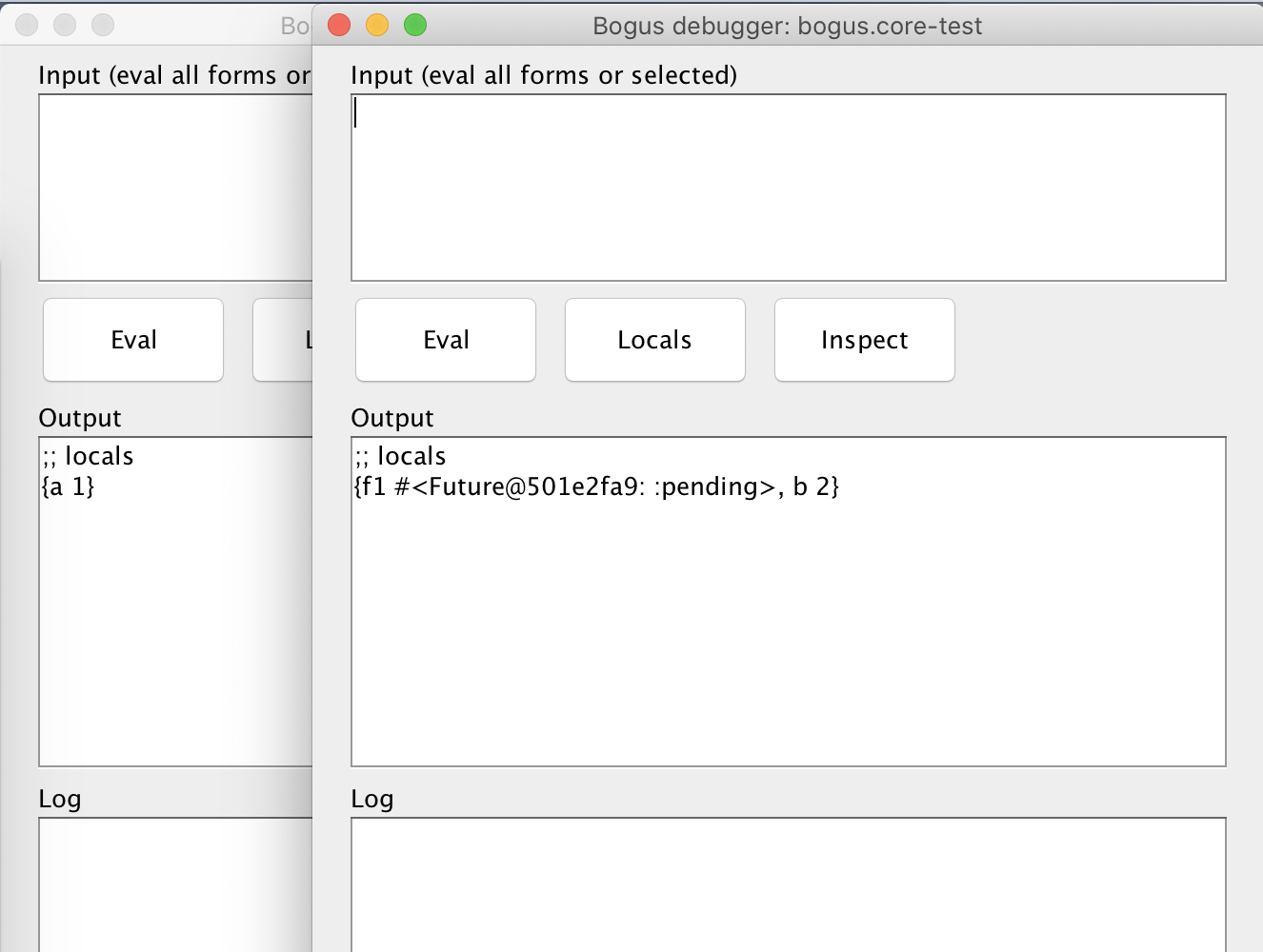 The second session has the f1 local var captured from the let clause. If you try to deref it, the entire REPL will hang due to the mutual blocking, so be careful when dealing with parallel debugging.

The under-hood of Bogus is simple: it captures the local vars from the &env mapping available in a macro. Then there is a couple of functions that “globalize” the locals by injecting them into the origin namespace using clojure.core/intern. Once the namespace is populated, the eval form treats local vars as globals. Before leaving the macros, the vars are “deglobalized” meaning all the injected vars are removed. The macros is smart enough to preserve existing global vars: it temporary assigns them another name like __OLD_my-var__.

The idea of making my own debugger came into my mind while I was writing a new chapter about nREPL and code evaluation. Although Cider provides much more powerful tools for debugging, I still believe Bogus might be useful for someone new to Clojure. The main benefit of Bogus is, it doesn’t require the whole nREPL stuff and Emacs. One can use it with any editor or environment. After all, tinkering with Bogus gave me some good material for the book.